The Latino Media Studies Program will be hosting the documentary screening on Thursday, April 4 at 2 PM in BMC 5.102. The event is free and open to the public.

“Covering Mexico for Texas: Correspondents in the Borderlands and Beyond” 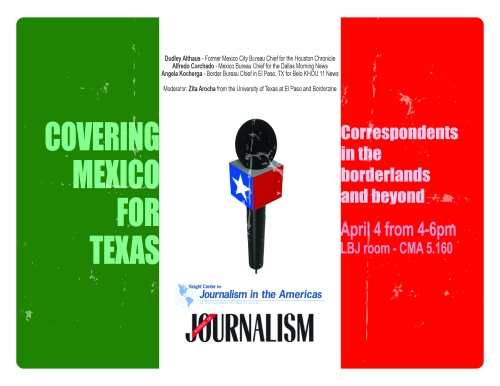 The Knight Center for Journalism in the Americas is hosting “Covering Mexico for Texas: Correspondents in the Borderlands and Beyond” next Thursday, April 4, at 4 PM in CMA 5.160.

The Undergraduate Research Journal (URJ) is looking for interesting research papers written by past or current undergraduate students. Submissions can include articles written for classes, independent study, supervised research, senior theses, etc. In addition to gaining a competitive edge for graduate school and job applications, authors of published papers are entered into the running for a $200 award for the best paper, and a $100 award for the second-place paper.

The journal is published every spring semester, and is circulated across campus and submitted to the Library of Congress.

You’re Invited to the Documentary Screening! 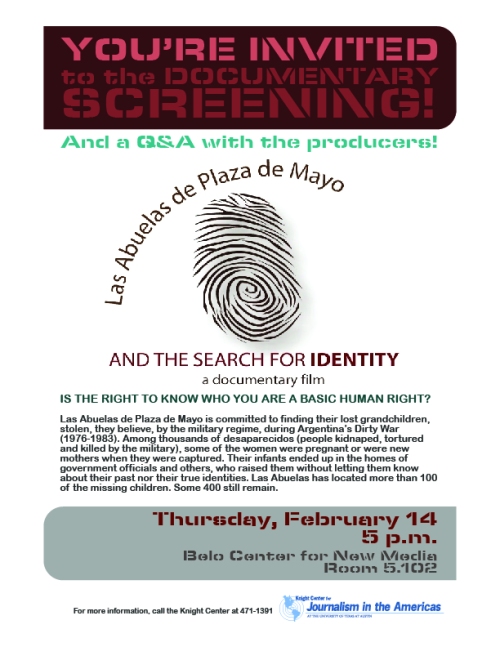 The Knight Center for Journalism in the Americas is hosting a documentary screening and discussion with the producers of “Las Abuelas de Plaza de Mayo” on February 14 at 5 PM in BMC 5.102. Open to the public.

“THE UT SOCIOLOGY DEPARTMENT INVITES YOU TO:

While college is sold to everyone as the key to a better life, it can often be a violent experience for students who do not fit neatly in our imagined community. The interactions between students of color, female students, and low SES students with their peers, professors, TAs, and UT staff are filled with messages that question their right to be here. This is because the UT community negotiates their integration into a campus that has been shaped by whiteness, heteropatriarchy, and middle-class values. The recent bleach-bombings of students of color in West Campus, the race-themed Greek parties, and the Fisher versus Texas case are all examples of resistance to the presence of students who do not fit the imagined white, male-centered and middle-class college campus.

As a response to these recent developments, the Sociology Department at The University of Texas at Austin invites you to a panel presentation and discussion to promote an understanding of issues of race, sex/gender and class at UT Austin. Through an interdisciplinary and intersectional lens, the presenters will provide much needed perspectives to contextualize the eruption of racial, gender and class violence on campus. Come participate in the conversation and help us answer: What can we learn from the experiences of students of color, female students, and working class students on campus? Why do we experience microaggressions along the lines of race, gender and class? What can scholars and members of the UT community do to transform the campus racial, gender and class climate?

The event is free and open to the public.”

An Evening with Maya Cinema

Four short films by Maya men and women film makers will be shown and discussed by poet and film maker Rosa Chávez.

Rosa Chávez (1980) is a Guatemalan poet of Maya K’iche’ origin. Her books of poetry include Casa solitaria (2005),Piedra abaj’ (2009), El corazón de la piedra (2010), and Quitapenas (2010). She is currently studying cinema and television in Casa Comal and participates as part of the Mayan Artists’ Movement, Ri Akux Nikotzijan.

Her work has been published in many journals and anthologies of poetry throughout the United States and Latin America. She has been invited to a number of poetry readings across the Americas and Europe.

Following her parents and ancestors customs, a Young woman must comply with an arranged marriage.

Yax loses interest in preserving his ancestral customs. His sister tries to convince him not to abandon the tradition. Thanks to a dream, he realices that to abandone one’s customs is to abandon oneself.

Rosibel’s mother has forbidden her to make tortillas over the stove. Secretly, she has not stopped making them. Her grandmother, when she notices her enthusiasm, decides to perform a secret Maya ritual so she can continue with this custom with the gift of energy offered by the Moon.

Candelaria, a spiritual healer, attends her patients with sincerity and humility. Her talent has turned her into an indispensable person por the inhabitants of a village by Lake Atitlan. However, this millenarian practice is being affected by rapid modernity.

The show is sponsored by the Spanish & Portuguese Department and  LLILAS